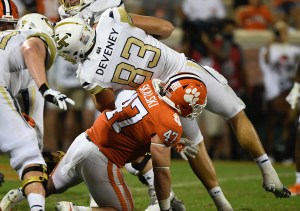 Being dealt a series of close losses can leave a bitter taste in a team’s collective mouth.

For Georgia Tech, the particularly sour taste of one of those setbacks a season ago is still lingering.

The 2022 college football season is less than six weeks away, but the Yellow Jackets’ most recent loss to Clemson is still a talking point among the team nearly 365 days later. Part of the reason, some of their players acknowledged this week, is because the teams will start the coming season with a conference-opening rematch in a primetime Labor Day slot inside Mercedes-Benz Stadium.

But Georgia Tech is also out for revenge of a nail biter that came down to the final seconds inside Memorial Stadium.

“I don’t think there’s a week that goes by where that Clemson game last year has not been a topic of discussion,” Tech running back Dontae Smith told The Clemson Insider at the ACC Football Kickoff.

Rewind to the third Saturday in September last year: Clemson held the Yellow Jackets to just six offensive points in both teams’ ACC opener, but the Tigers’ offense also showed its first real signs of the struggle it experienced all season. Clemson, which found the end zone just twice for its only points of the game, clung to a 14-6 lead with the Yellow Jackets driving late in the fourth quarter after recovering an onside kick.

Tech set up first-and-goal inside the 5-yard line as the clock ticked inside 35 seconds, but Clemson held on to the Yellow Jackets’ next three snaps, setting up a decisive fourth down from the Tigers’ 3. Tech dialed up a shovel pass to tight end Dylan Deveney, but James Skalski sniffed it out and dropped Deveney in the backfield with 15 ticks left as the Tigers escaped with their seventh straight win in the series.

The goal-line stand loomed even larger minutes later when Will Shipley recovered his own fumble in the end zone for a Tech safety.

“It’s definitely one that you look back on and it hurts a little bit,” fellow tight end Dylan Leonard said. “We lost by six and got stopped on the 1-yard line with time expiring. It’s one of those games where you’re so close, you know?”

Said Smith, “It’s just a burning image in my head. And the same for my teammates.

Clemson went on to record an 11th straight 10-win season. For Tech, it was part of another frustrating year full of similar tough luck. The Yellow Jackets lost four games by eight points or less, including three ACC contests. It contributed to a 2-6 conference record and a third straight 3-9 season.

Those tight scores have bred confidence in the Yellow Jackets that they’re close to reversing their fortunes heading into Year 4 of the Geoff Collins era. At this point, junior defensive back Zamari Walton said, it’s about finishing.

“I feel like those single-digit games showed that we’re just a little bit closer and we just need to do the little things right,” Walton said.

Leonard said most of the conversation within Tech’s program about Clemson at this point is geared toward the Yellow Jackets’ game plan for this year’s matchup rather than last year’s disappointment, although that’s subjective depending on who you ask. But there’s no debating how motivated Tech will be this time around.

“(Last year’s ending) was crushing,” Smith said. “But we have another opportunity, and we’re going to make the most of it.”

Dear Old Clemson’s first event is July 24. Now there is a new way to support Clemson student-athletes. Come out and meet the freshmen football players at this meet and greet autograph session. If you sign up for certain club levels you get free access to all Dear Old Clemson events. Purchase your tickets today at Dear Old Clemson.

Teter’s goal pushed Texas Tech to a tie with Denver.