Early last decade, worries over slackening demand for armored tanks put the fate of General Dynamics‘ (GD -0.06%) tank plant in Lima, Ohio — and the jobs of 900 workers — at risk. Israel had just cut short a supply contract for hundreds of armored personnel carriers to be produced at the plant and, combined with declining demand for main battle tanks for the US Army, the Lima factory looked set for mothballing. 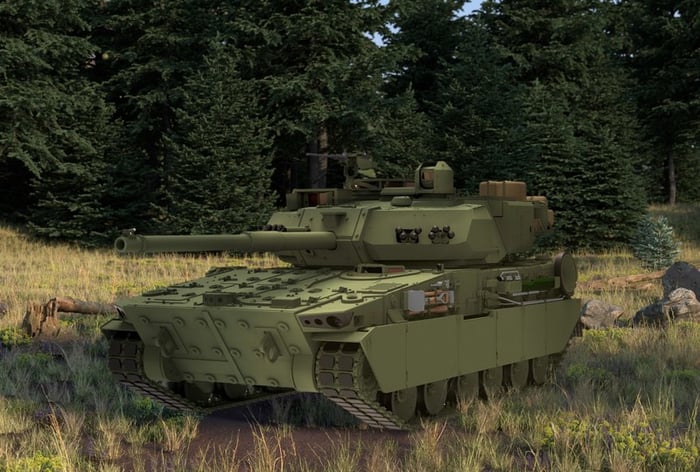 From 2015 through 2019, a windfall of contracts from the US Army, as well as from allies in the Middle East — Iraq, Saudi Arabia, and Kuwait — provided a lifeline to keep Lima open, but these were just stopgap measures with limited production numbers. More long-lasting good news for Lima and General Dynamics arrived last month when the US Army announced it had awarded General Dynamics $1.14 billion to develop a new light tank under the latter’s Mobile Protected Firepower (MPF) program.

The MPF diesel tank, says General Dynamics, will be a “highly lethal, survivable and mobile direct-fire combat vehicle” featuring a lightweight hull, carrying a large-caliber cannon, and guided by an enhanced thermal viewer. It will be deployed to add punch to Army Infantry Brigade Combat Teams (BCTs), rather than (as you might expect) the Army’s Armored BCTs.

Tanks for all the money

As BreakingDefense.com points out, the MPF light tank “will be the Army’s first newly designed vehicle in over 40 years.” Winning the competition to build it (Britain’s BAE Systems had also submitted a bid) will therefore mean years of new business for General Dynamics as it first develops the product, then builds out hundreds of units of the new tank over time.

How many hundreds? The initial low-rate production contract for $1.14 billion hires GD to build 96 MPF light tanks, with the first one due by the end of next year. By 2030, GD is supposed to have built enough tanks to outfit four battalions (168 tanks) — and even then the contract will only be one-third complete.

Ultimately, the Army says it will need 504 MPF light tanks, and it plans to spend $17 billion on the program over its 30-year lifespan.

Now, that sounds like a lot of money — and it is. In fact, dividing 504 tanks into a $17 billion cost seems to imply that each tank will cost taxpayers as much as $33.7 million — several times more than the purchase cost of a larger M1A2 Abrams main battle tank (also built by GD). That $17 billion figure, however, probably encompasses everything from developing and building to maintaining and servicing the tanks. Actual purchase costs are expected to be a more reasonable $12.7 million per unit for the initial lot of 28 light tanks that will begin arriving next year, reports BreakingDefense.

What it means for General Dynamics

Still, from a big-picture perspective, General Dynamics shareholders should probably look at the total cost of this program as a better representation of what it means for the defense company. First and foremost, $17 billion over 30 years means roughly $570 million in new revenue per year — about an 8% increase over the $7.2 billion that General Dynamics’ combat systems division raked in last year.

Even better for shareholders, combat systems is by far General Dynamics’ most profitable business unit, generating an operating profit margin of 14.5% on its sales. Over 30 years, this $17 billion in revenue should translate into profits on the order of $2.5 billion for the company — perhaps more, if cost estimates for the program turn out to be conservative. And by keeping the production lines in Lima humming, this contract also helps to ensure General Dynamics will not have to incur the cost (estimated at $800 million or more) of having to shut down and later restart production at Lima due to lack of demand.

And once the MPF has been developed, and General Dynamics begins producing it en masse, and eventually starts inking international sales contracts? In that case, you can expect even more revenue and profits to accrue to General Dynamics — again, at its most profitable business division.

Long story short, this is good news for General Dynamics stock. I don’t know that it’s good enough news to justify a P/E ratio around 18 at recent prices, or its even pricier-sounding 1.5 times sales valuation. (Historically, US defense contractors have averaged P/S ratios closer to 1.0.) But at the very least, this contract should help generate the profits needed to push General Dynamics shares back toward fair value.