My top technology stock to buy in August is Alphabet (GOOGL -1.25%) (GOOG -1.00%). The advertising giant is weathering macroeconomic storms relatively well and is selling at its lowest price in nearly a decade.

Alphabet is home to some dominant business segments, including Google Search and YouTube. Moreover, Alphabet serves a total addressable market approaching $800 billion. Let’s look at why Alphabet is my favorite tech stock for August.

Despite the macroeconomic headwinds arising from rising inflation, supply chain disruptions, and the Russian invasion of Ukraine, Alphabet’s revenue increased by 13% in its fiscal second quarter, which ended on June 30. The increase was fueled by its Google Search segment, which saw sales rose to $40.7 billion in the quarter, up from $35.8 billion in the same quarter the year before. 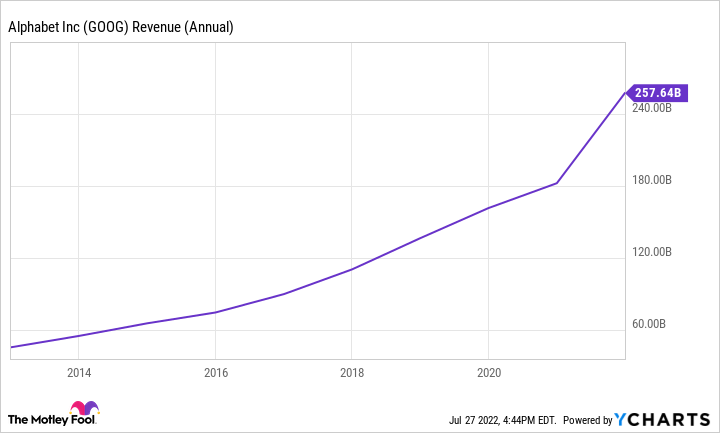 Google is the most dominant search engine in the world, with an estimated 83% market share worldwide. That level of dominance allows it to extract higher prices from advertisers interested in prominent locations for search queries. Since many purchase decisions begin with an internet search, this has been a lucrative business to capture. It can partially explain Alphabet’s revenue rising from $66 billion in 2014 to $258 billion in 2021.

Another place consumers might start a purchase decision is on Alphabet’s YouTube. The streaming video platform with free and paid versions boasts 1.5 billion monthly users. YouTube generated $7.3 billion in revenue from advertising alone in the quarter that ended in June. With Google Search and YouTube, Alphabet takes a meaningful share of worldwide advertising spending, which totaled $763 billion in 2021. Still, the massive market size leaves Alphabet room to expand for several years without hitting the ceiling.

Alphabet’s scale has increased operating income from $16.5 billion in 2014 to $78.7 billion in 2021. If it sustains its growth trajectory, it increased revenue at a compounded annual rate of 21.1% in the previous decade; investors can reasonably expect Alphabet’s profits to grow even more. 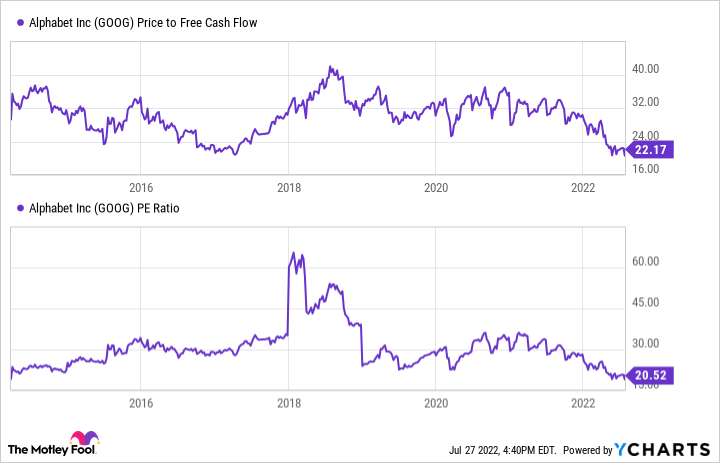 This stock is arguably cheaper than it’s been in the last decade, measured by Alphabet’s price-to-earnings of 20.5 and price-to-free-cash-flow of 22. Shares have gotten cheaper as investors have worried about the adverse effects of macroeconomic headwinds on Alphabet’s business. Given the latest quarter’s results, those concerns appear like an overreaction.

Alphabet runs a dominant business operating in a massive industry, selling at a bargain price. For those reasons, Alphabet is my favorite tech stock to buy in August.

A new iPhone feature could cause legal issues.