Fast fashion is both an economic and sociological phenomenon that has grown to epic proportions. What we cut in costs for garments is borne twice over by the planet, and it is absolutely crucial that we change our regulations and behaviours. We believe in empowering people with knowledge, so here is our list of the 10 most essential fast fashion statistics that will help you understand the detrimental impact of this industry on the environment. 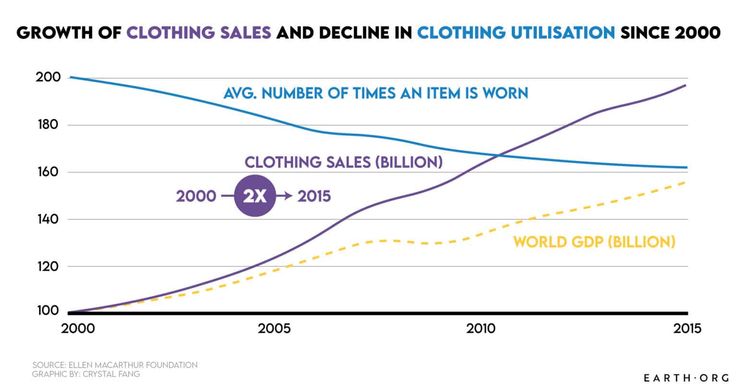 These two statistics are the embodiment of fast fashion. Clothing sales doubled from 100 to 200 billion units a year, while the average number of times an item was worn decreased by 36% overall.

4. More than $500 billion are lost every year due to lack of recycling and clothing utilization

Garments given up early and thrown out instead of recycled combine to produce massive wastage, estimated at around $500 billion every year. A large portion occurs on the consumer’s side, but retail stores are just as guilty, often spotted tossing or burning unsold stock.

5. Fashion habits around the world vary

The previous statistics gave a global snapshot of the situation, but fast fashion is more or less prominent depending on where you live. 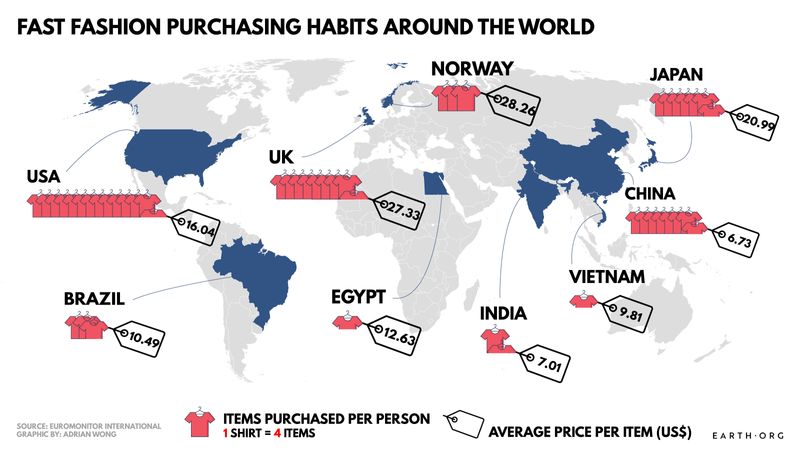 The fashion industry consumes a monstrous amount of water, around 93 billion cubic meters, leaving much of it contaminated by toxic chemicals. According to the UN Environment Programme, 20% of global wastewater comes from textile dyeing. Because the bulk of the production is in countries with less regulation, the wastewater often finds its way to rivers and seas where it can wreak havoc.

7. We discard 92 million tons of clothes-related waste each year

This next figure on our list of fast fashion statistics can be difficult to grasp, so let us reframe it.

8. Produces half a million tons of microplastics

You’ve surely heard of the plague of microplastics, now seemingly ubiquitous on Earth. They are found everywhere, from the top of Mount Everest, to within the very air we breathe. The oceans are riddled with them, routinely ingested by fish, which are then eaten in turn as the plastic works its way up the food chain.

Garments are a huge source of microplastics because so many are now made of nylon or polyester, both durable and cheap. Each wash and dry cycle, especially the latter, sheds microfilaments that move through our sewage systems and end up in waterways. We estimate that half a million tons of these contaminants reach the ocean each year.

9. Returns of items bought online exceed the amount of all purchased goods

As more and more online retailers, big and small, offer the option to send back goods easily and often for free, return rates, especially of fashion items, have skyrocketed, exceeding 30% of all purchased goods.

10. You can easily help cut consumer emissions by more than half

It has been shown that by:

We would reduce consumer emissions by more than half.

That may seem like a complicated set of instructions, but the message is that small cuts or changes of behavior here and there make a big difference. You can be part of that.