Not all of my ideas are good, but I was hoping this would be one of them.

He came to me as I carefully climbed the scaffolding leading to the 10th floor of the future Bangor Building at Cherappa Place downtown.

There’s little point in visiting a 10-story project if you can’t see the view from the top, right? 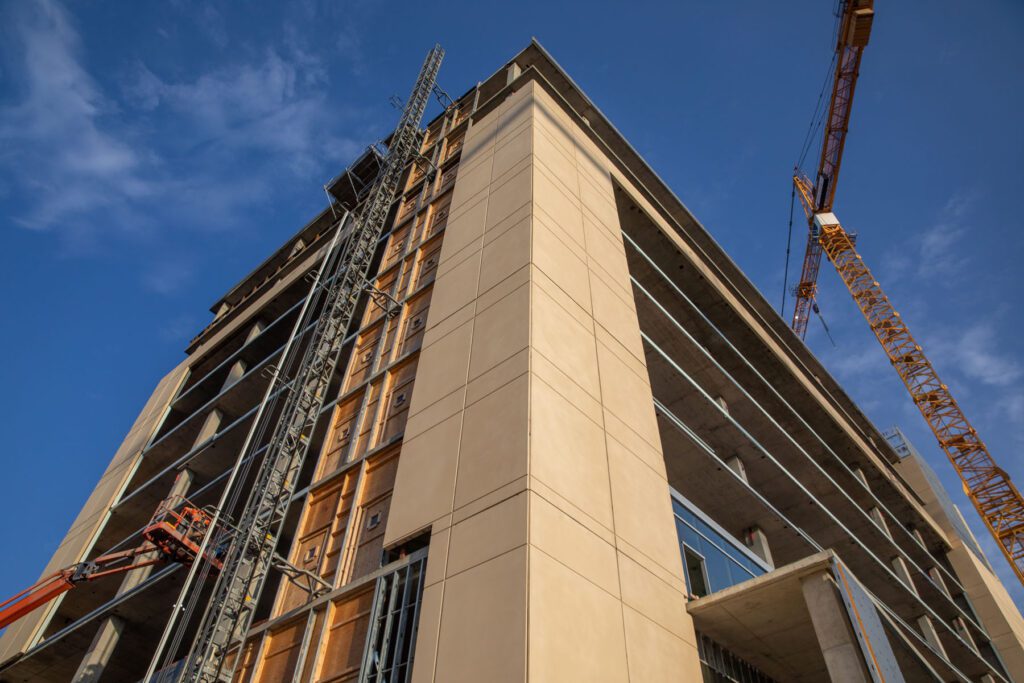 And when I did, I knew who would appreciate it more than I did: Craig Lloyd, chairman of the board of Lloyd’s Co., which is behind another huge downtown redevelopment, the Steel District. 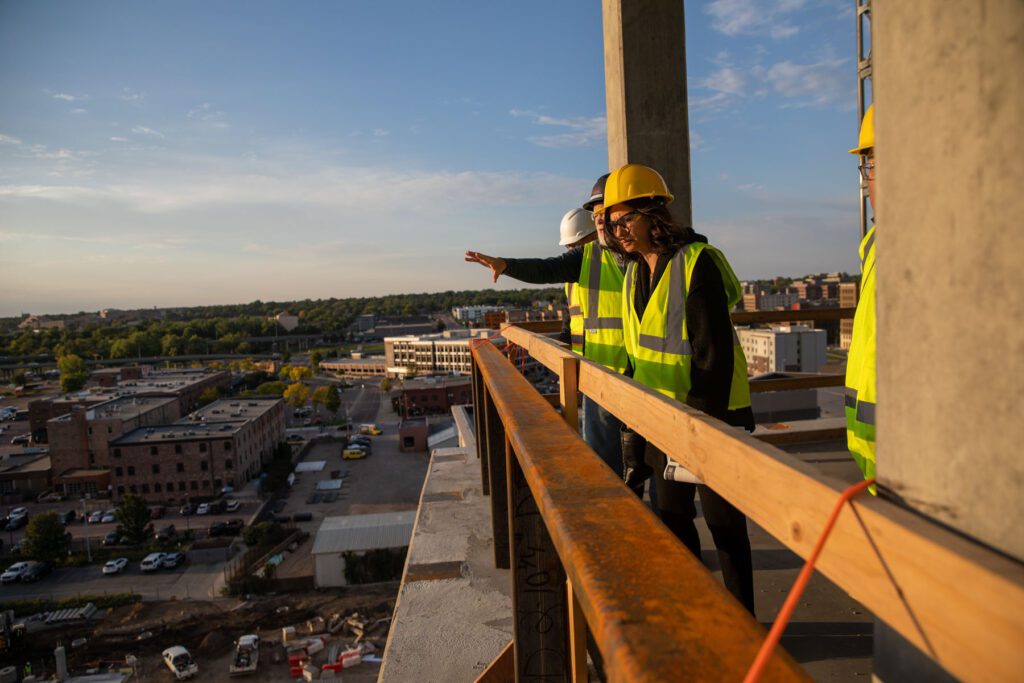 The idea turned into a tour, and one Friday morning the heads of Lloyd Cos and Pender Properties, developers of Cherappa Place, agreed to show each other, and I, each other’s projects. 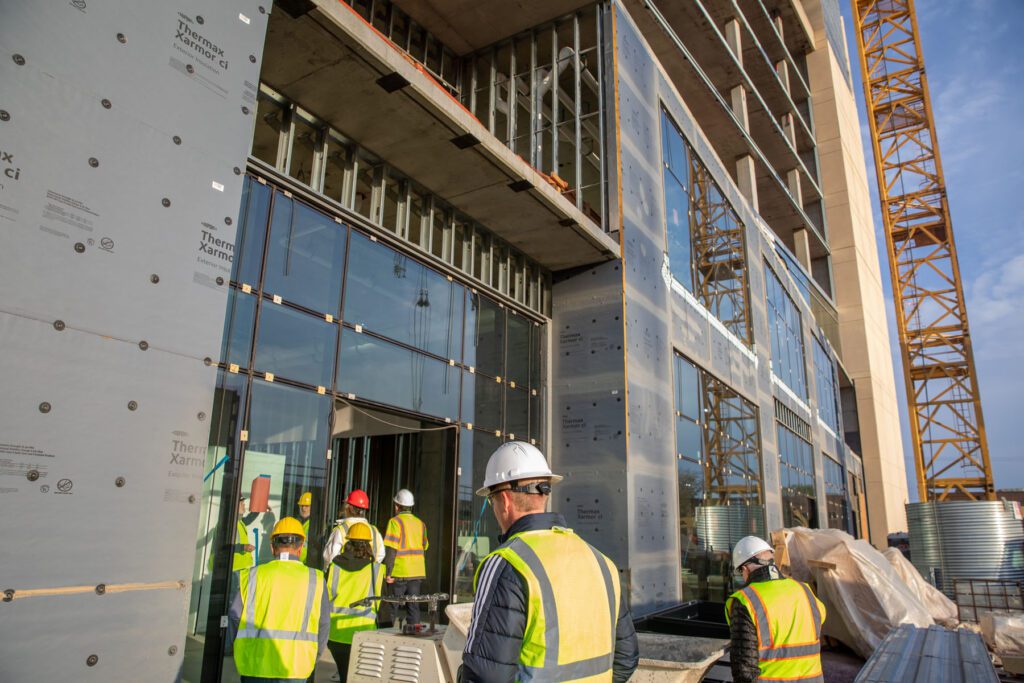 There are few places in this country, I’d wager – and smaller communities – that have so many towering construction cranes working on half a billion dollars worth of new development right next to each other downtown. 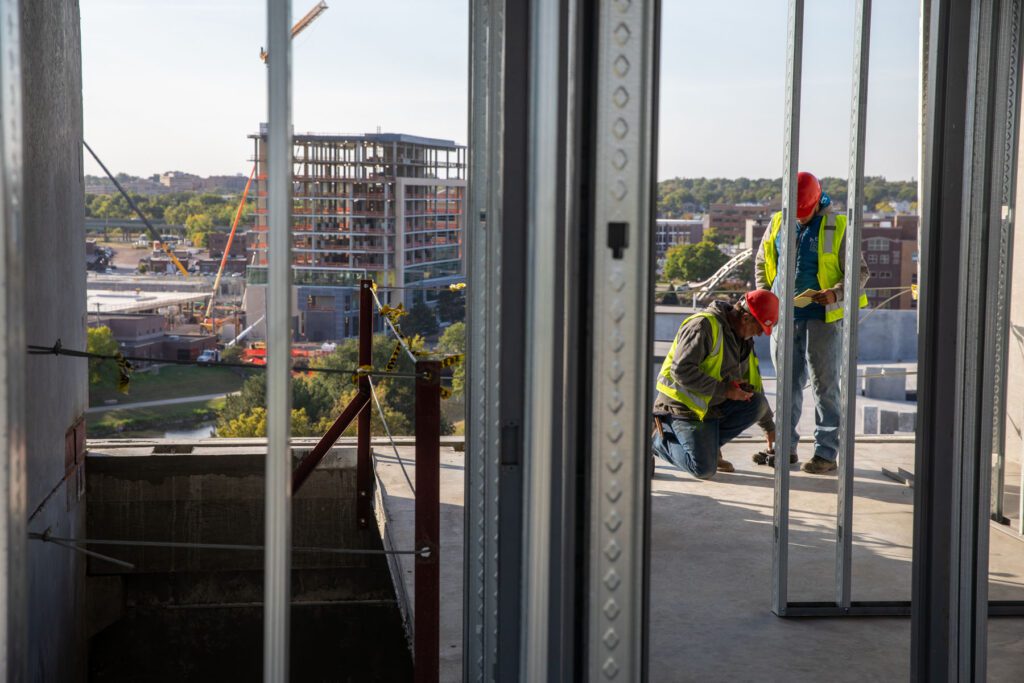 Leaders of both companies get behind their projects and rarely express their appreciation for what their peers are building. 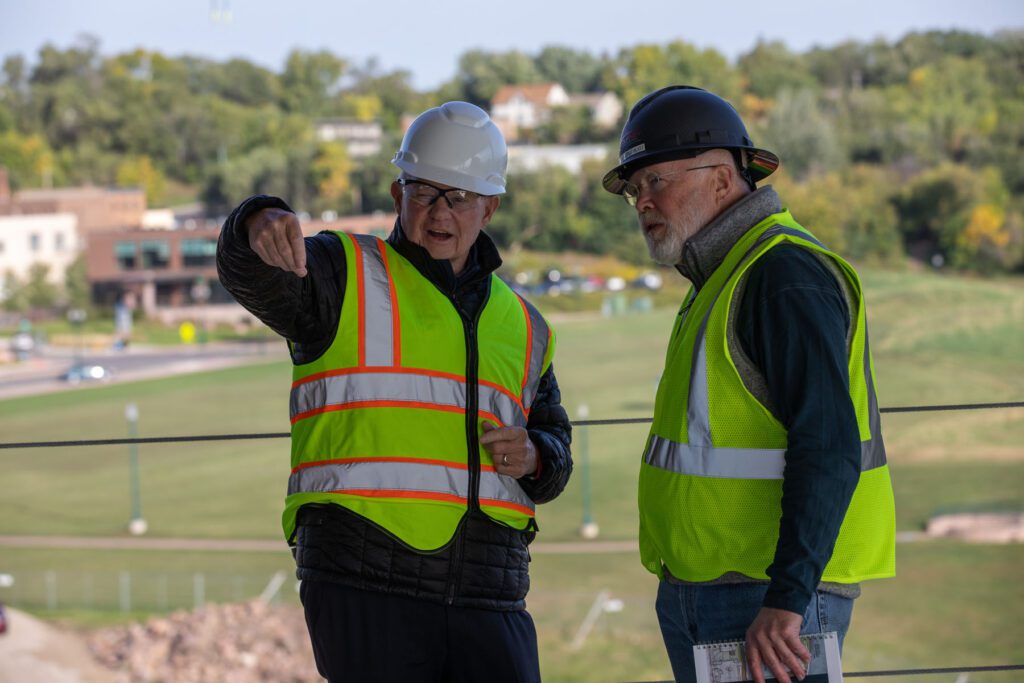 For two hours, we drove through downtown properties. Craig Lloyd, Jeff Scherschlig and next generation family leaders Chris Thorkelson and Anne Haber joined several Sioux Falls directors to show off the impressive progress their buildings are making. Between them are nine multi-story buildings in various stages of construction, from office towers to a destination hotel, hundreds of new apartments and luxury condominiums. 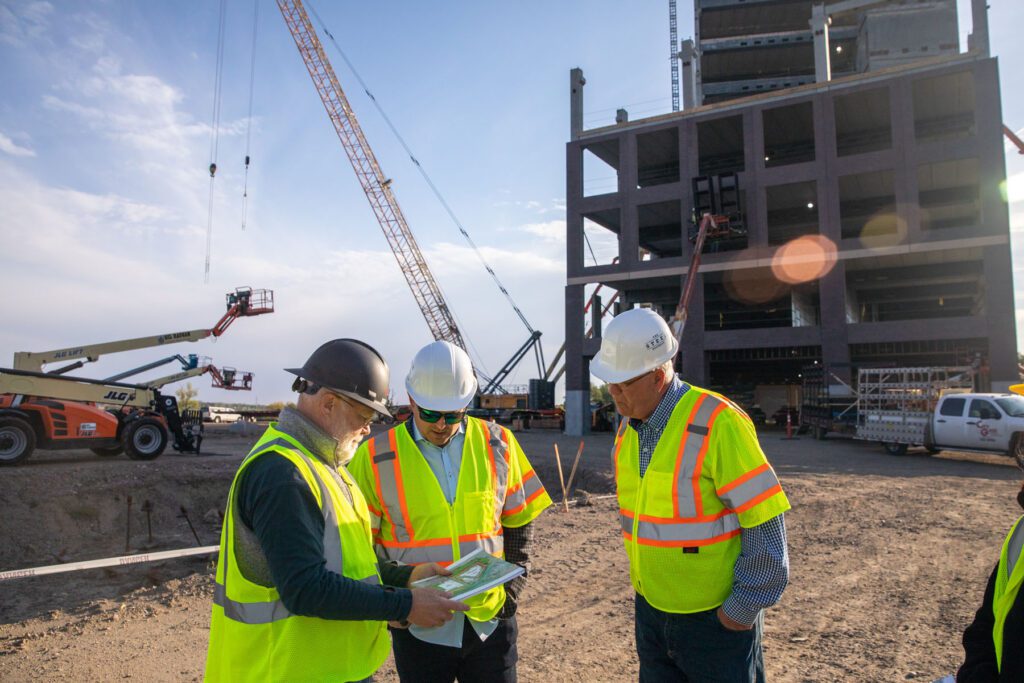 “How are your condom sales coming along?” Lloyd asked Scherschligt at one point in the tour.

“We only have three left,” he said.

“Wonderful?” And I could tell he meant it. In case you missed it, these guys technically compete with each other for buyers just like they do for office tenants and retailers and apartment renters.

But that, in a word, captures what sets Sioux Falls apart. 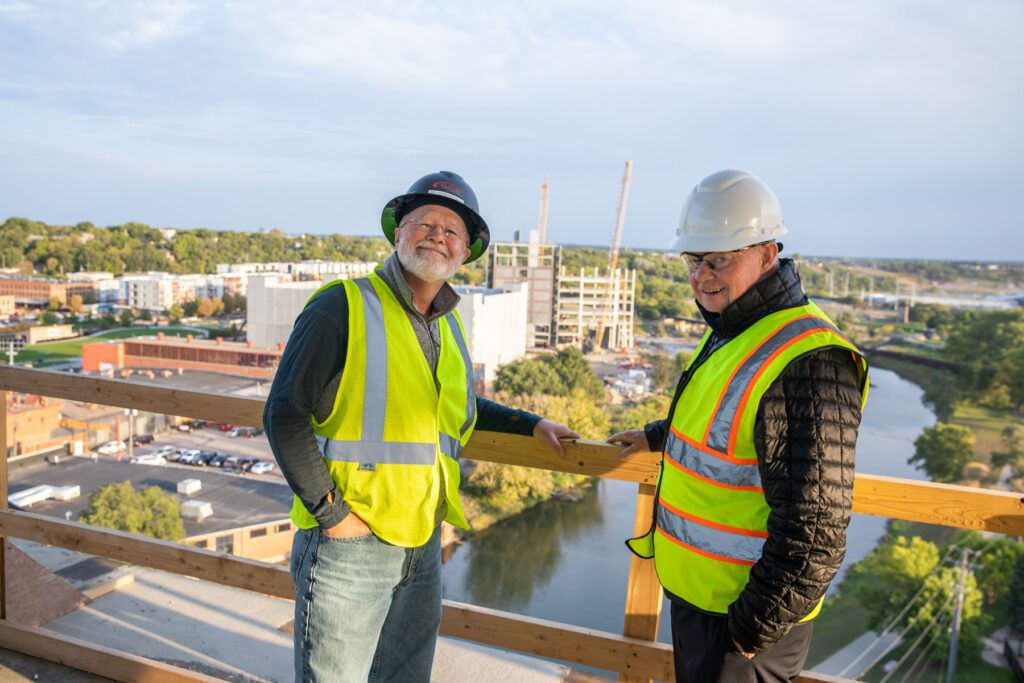 As the city develops its Downtown 2035 long-range plan, I thought I’d talk to the consultants hired to do a market analysis.

They came with the same feeling.

“We interviewed people from both groups, and they seemed to be playing the market right,” said Ted Camp, senior associate at Leland Consulting Group.

The two are “not really competitive,” agrees co-star Chris Zehas. “Both have already leased their buildings, and that’s very special. Communities like Sioux Falls that Ted and I work with may have the demographics and job base, but they don’t have the people to build them. It takes a developer of some kind to pull off a mixed-use project downtown. 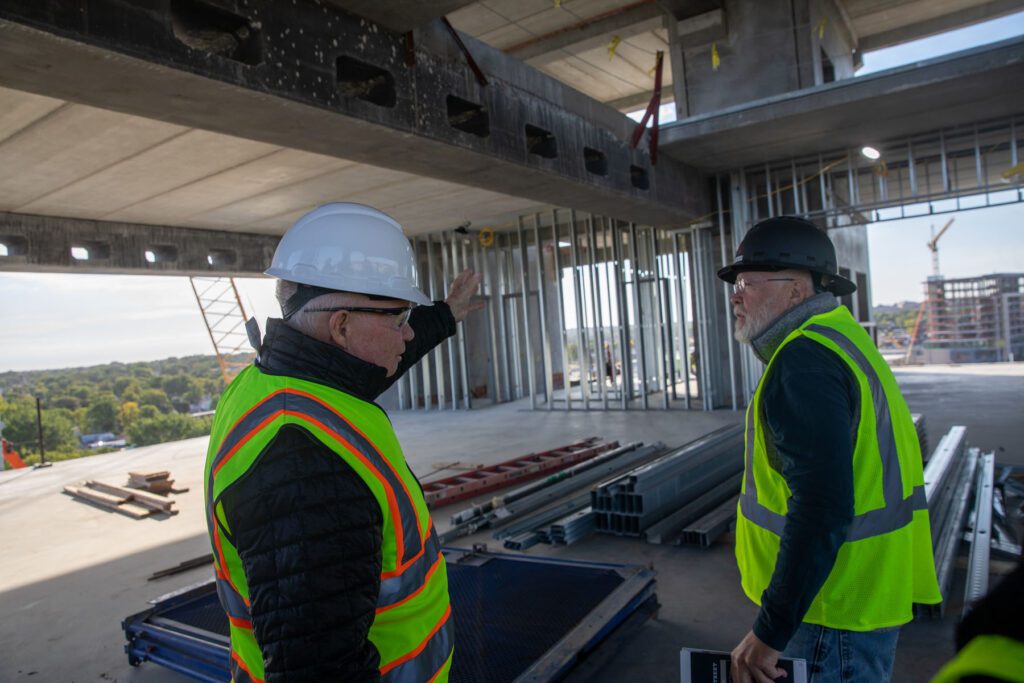 In many communities our size, there aren’t developers with that skill set, and not enough to draw from large markets.

“You have talented developers in a mid-sized city doing big-city-like development, and they’re local, so they’re rooted in the community and that’s an asset,” Zehas said. “That’s the difference. Which cities go down the path of downtown revitalization and which don’t (depends on) whether or not you have local developers working for that kind of development? The ones that pick up and the ones that don’t slow down,” he said. 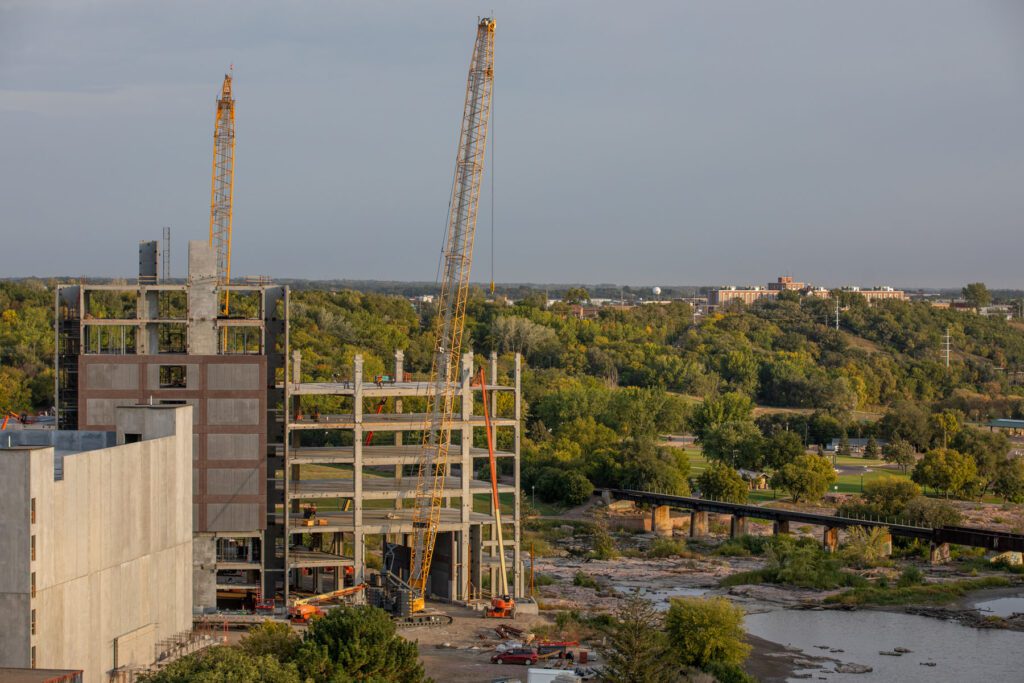 The market analysis and long-term plan have not yet been completed or approved, but a recent executive summary has begun to detail the possibilities as it looks toward Downtown 2035.

I was particularly intrigued by the properties identified as redevelopment sites, including some we haven’t discussed much – the Wells Fargo block and property east of downtown currently used by the State of South Dakota for the Department of Labor and other offices.

Farther ahead, there may be other, even greater opportunities.

“At some point in 15 to 20 years, Smithfield is going to be penciled in to build a new plant somewhere,” Camp said. “And this opens up a large piece of land. And the prison – no one talks about anything – at some point he can go and open a huge piece. So the North can afford it in the long run. 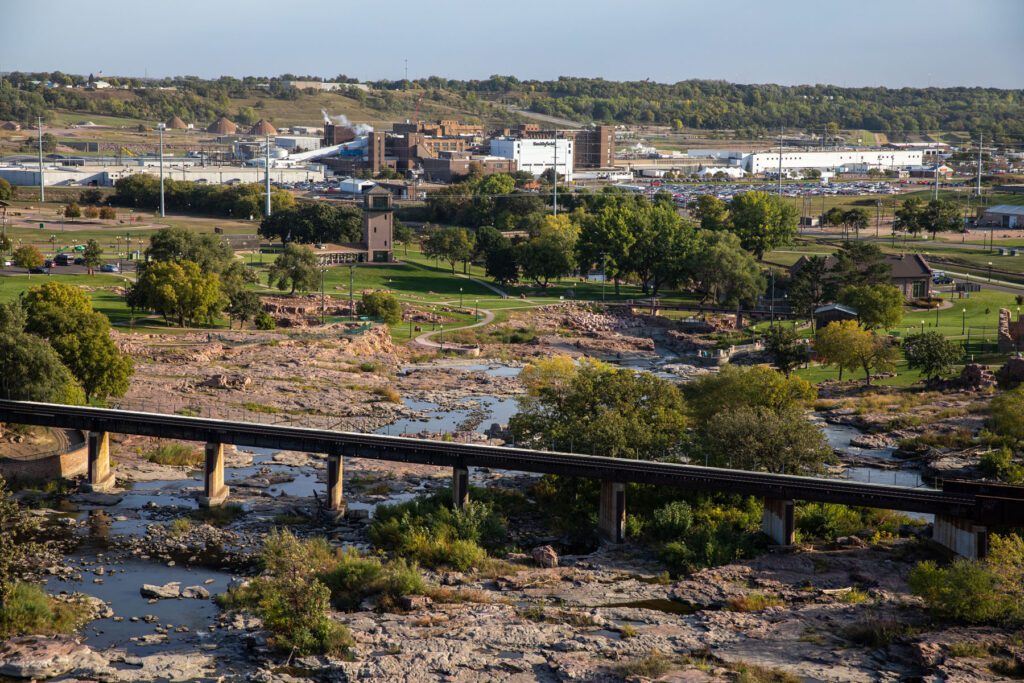 Meanwhile, the city announced last week that it plans to solicit proposals from developers to build around the parking lot on 10th Street east of Phillips Avenue. Assuming that interest aligns with the city’s goals for the property, it could create another mixed-use project.

“The most important thing is to keep the momentum going,” Zahas said. “Stagnation kills everything, and the isolation of a failed project can slow things down. Don’t have low standards, but don’t turn down something that might be really good, even if it’s not what you originally wanted.

I agree that it is important to keep up the momentum – but with one more.

As we continue to build downtown and visit Cherappa Place and the Steel District in this region, maintaining the same community-first spirit that I saw under the cranes is the most important thing. 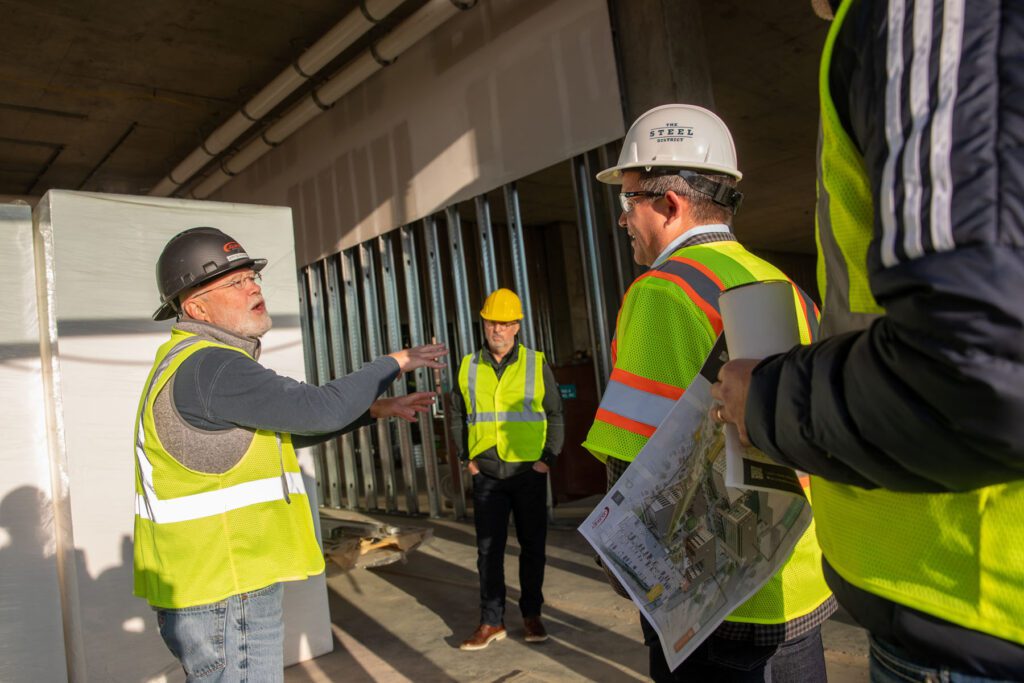 We are fortunate that these developers are talented enough to make things happen, committed enough to bet on our community, and able to convince others to do the same. And of course, even though it’s an inherently competitive industry, at the end of the day, they really want each other to succeed. 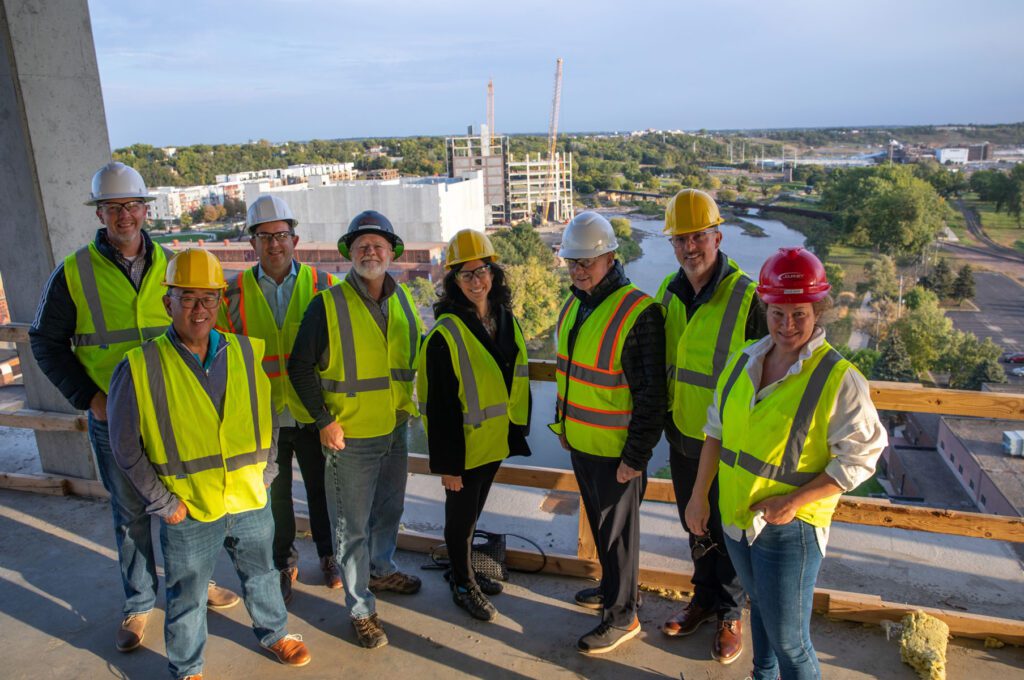 That creates efficiencies that will appeal to other businesses, including The Bancorp, which announced last week that it was moving its headquarters from Delaware to South Dakota. The business is the anchor tenant in the 10-story mixed-use building at Cherappa.

Chief Marketing Officer Maria Wainwright said: “We couldn’t be more excited to be a part of this incredible growth. “When we all help each other and the Sioux Falls area, especially along the river. From the outside perspective of someone who doesn’t live there but flies there often, it’s just a great city and a great city to be part of, and I just love where we are.” 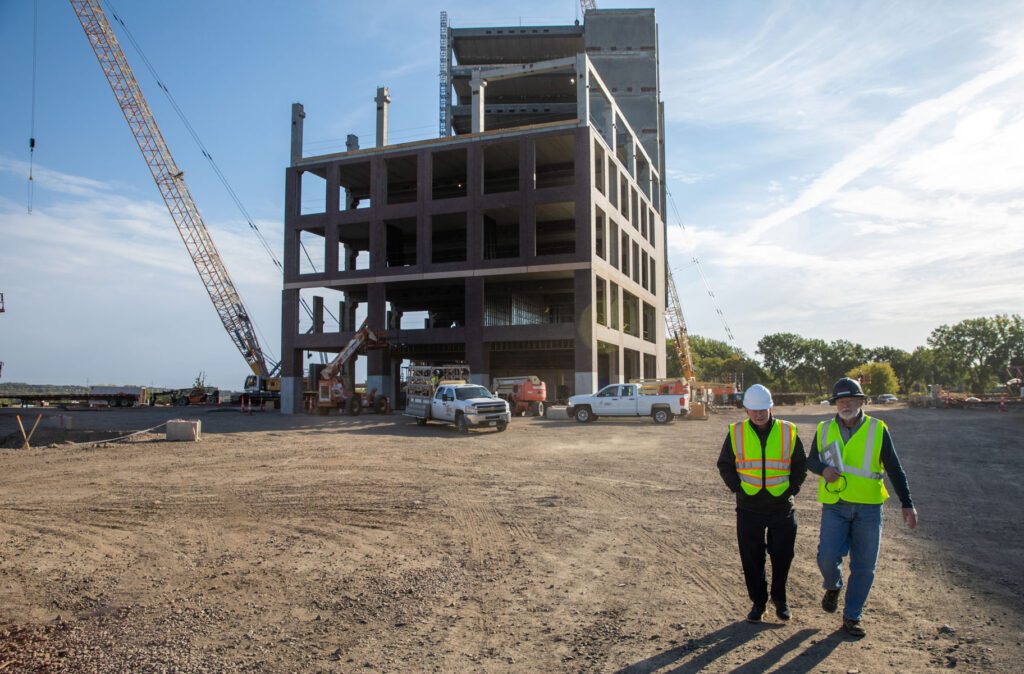 Business competition is healthy when everyone is pushed to do their best. Government works best as a player in supporting growth, not a roadblock. Combine the two and put community above individual needs, and you’ve got the ultimate trifecta.

Looks like we made it to downtown Sioux Falls this time. In the year If we can continue to take advantage of the opportunities in 2035 and beyond, it will be, to quote Craig Lloyd, “fantastic.”

Looking for opportunities to expand the downtown planning process